“We are very pleased with this level of success so soon after the introduction of the system and believe it can be attributed to key design characteristics of the HVLV system,” comments Brad Welch, COO of Godfrey & Wing. “Most importantly, the high performance levels achieved with the HVLV vacuum impregnation system are clear-cut and well understood by the marketplace, while the compact design – which requires dramatically less floor space than conventional systems – also offers a highly significant, additional benefit. 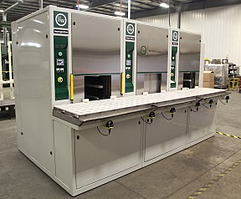 “Further important advantages of the new design are also widely acknowledged. For example, conventional impregnation systems require expensive infrastructure modifications, such as recessed equipment pits and overhead gantries to move batches of parts through a line and can require cycle times of up to 40 minutes,” continues Brad Welch. “Now however, by contrast, the HVLV front load system does not require costly infrastructure – components can be simply loaded directly from a conveyor for processing, with clean, sealed parts produced in a cycle time of just 3.5 minutes.

“Components such as cylinder blocks, transmission cases, aircon compressor bodies or fuel injection parts can now be processed individually in a unit that requires no more floor space than, for example, a parts cleaning system,” he adds.

Much of Godfrey & Wing’s growth and success since it was founded in 1948, has been centered on a superior understanding of the vacuum impregnation process and applying that knowledge to a wide choice of equipment – from top load batch systems to fully automated, high speed designs. The range has long been associated with high quality and performance, and the introduction of the new HVLV front load system builds on this history of innovation.  Manufacturers in industries ranging from automotive to the military, as well as those involved in the full range of general engineering processes that use castings, all stand to gain from this latest development from Godfrey & Wing.

The Godfrey & Wing HVLV vacuum impregnation system produces 100% pressure tight parts and features advanced, effective and green impregnation technology. It produces a low carbon footprint at a capital cost that makes impregnation affordable for any OEM or manufacturer using castings. Its design enables users to conserve resources while providing repeatable, precise and clean impregnation processing.  Comprised of three modules, it is simple to operate and its readily accessible components allow for ease of both installation and preventative maintenance procedures.

“Each HVLV installation can process up to 15 cycles per hour and utilizes a dry vacuum and pressure impregnation cycle, reducing the time to impregnate by approximately 80% compared with more conventional alternatives,” comments Wade Fisher, Godfrey & Wing’s Engineering Manager. “It also produces a higher sealing result compared to the dry vacuum only process.

“The new HVLV vacuum impregnation system represents a major development for Godfrey & Wing – its throughput, recovery rate and dimensional advantages reflecting our continuous commitment to innovation,” he continues. “The design takes vacuum impregnation to another level and makes it a far more accessible manufacturing process for a wider range of customers.  The immediate sale of six HVLV systems pays testimony to this and reflects benefits and advantages of the system that will be recognized by everybody involved in the castings and manufacturing sector.”