The Albert Handtmann Metallgusswerk GmbH is the largest lightweight (aluminum) foundry in Germany. The family-owned company has continually endeavored to improve its casting and machining processes to benefit its customers worldwide.

Thus, when Daimler AG awarded Handtmann a contract to cast and machine one third of the entire worldwide production of transmission cases and clutch housings for the Mercedes A-Class, B-Class, CLA-Class, and GLA-Class vehicles, the managing directors and board at Handtmann saw an opportunity. It was an opportunity to build a world-class production facility fully dedicated to automated one-piece flow in the complete machining and post-machining processes of these Mercedes cases and housings.

As a company, Handtmann was expert in almost all of the production processes required as part of this new facility. However, in order to achieve true one-piece flow, Handtmann had to bring inside a critical aspect of quality control that the company had previously hired out, vacuum impregnation.

In the past after machining, Handtmann had always sent out its transmission cases and clutch housings to vendors to be vacuum impregnated. The company’s experience here was not always pleasant. At external points parts have been damaged during transport or contaminated. To avoid additional handling and costly washing-process, they decided to integrate this process into the (manufacturing) line.

For Handtmann, the challenge was to quickly educate its executives on the detailed aspects of vacuum impregnation, then chose the proper vacuum impregnation equipment to install. This equipment would have to meet Handtmann’s demands to seal casting porosity effectively and to meet production volumes, to do so in a 96-second per piece TAKT time, to fit into a confined space on the facility’s floor, and to fully integrate within the automated processes that would govern the entirety of the plant.

Since several of Handtmann’s vacuum impregnation service providers also build impregnation equipment, the company began by soliciting bids from these traditional sources. However, it was apparent immediately on receipt of these bids that the equipment proposed could not possibly be installed as part of a one-piece flow manufacturing line. The big batch systems that were recommended require parts to be manually loaded and unloaded and they carry a high risk for damage and contamination to the machined parts. They require significantly more TAKT time to complete the impregnation process. They also require a tremendous amount of floor space, for both the equipment itself as well as for loading and unloading areas. Hence, the big batch systems proposed early on were completely disqualified. Handtmann needed more advanced technology. Enter Godfrey & Wing.

By chance, a Handtmann engineering executive came across an article about a different process of vacuum impregnation called Continuous Flow Impregnation written by Ralf Versmold, Godfrey & Wing’s sales and service director for Europe based in Germany. As the name itself indicates, Continuous Flow technology was developed by Godfrey & Wing to answer the demand for the vacuum impregnation process to be fast, efficient, and capable of being installed as part of a machining line where floor space is limited.

After visiting several CFi installations in 2012 and learning firsthand from Godfrey & Wing customers about the effectiveness and efficiency of these CFi systems, Handtmann purchased a multi-station CFi from Godfrey & Wing in early 2013. The system was installed in Handtmann’s new Mercedes one-piece flow manufacturing facility in Biberach, Germany in late 2013 where it operates alongside machining centers, parts cleaning equipment, and pressure test benches in a fully automated environment. This CFi includes a compact impregnation pressure vessel, a high-speed centrifuge, a wash tank, and three cure stations, all serviced by a robotic arm and automated conveyors. Six days per week, 24 hours per day, this CFi vacuum impregnates every transmission case and clutch housing that fails its initial pressure test.

In Summary
Considering the four demands required of it– speed, efficiency, and total automation within a small footprint, Godfrey & Wing’s Continuous Flow Impregnation system has proved to be the perfect solution for Handtmann Metallgusswerk in its dedicated Mercedes machining facility. Today, this CFi plays an integral role in the manufacture of these transmission cases and clutch housings and it does so in one of the most advanced manufacturing facilities in the world.

Production manager Heiko Pfeiffer sees a huge cost/handling and thus competitive advantage due to the direct automatic integration of the CFi-technology. He confirms, that the CFi-technology is actually the only possibility to integrate the impregnation-process into the manufacturing-process within a modern production-environment. 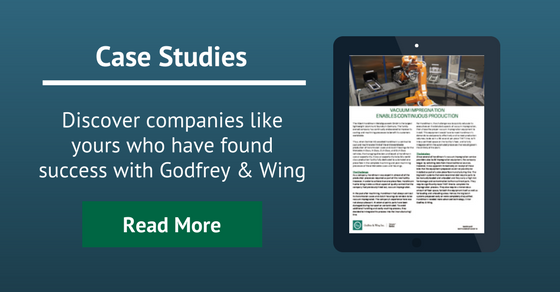