A question that is often asked is "Will the sealant used in vacuum impregnation melt?" This is asked by those who's castings need to withstand heat. In this blog, we will answer this question.

The short answer is no, Godfrey & Wing sealants do not melt under standard operating temperatures. Impregnation sealants are based on polymethacrylate plastics. There are two types of polymethacrylates: thermoplastic and thermoset.

A thermoplastic is a polymer that softens on heating and hardens on cooling. Common thermoplastics are polyethylene and polystyrene.

A thermoset is a durable plastic that once formed or molded, retains its form and shape even if heated or subjected to various solvents. Vacuum impregnation sealants are thermoset.

These two types of plastic are both called polymers. Polymers ("poly" = many from Greek) are very large molecules comprised of smaller molecules called monomers ("mono" = one). Most polymers consist of monomers that are similar to each other, joined together in a straight chain, like a strand of spaghetti. However, chemists have learned to link these chains together, called “crosslinking”. Chemists crosslink thermosets in a 3D network to prevent them coming apart when heated or exposed to aggressive liquids. 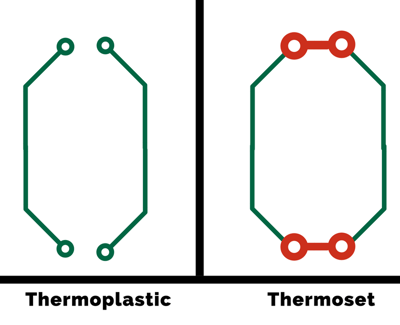 Looking at the pictures above, a simple way of understanding this is to imagine a thermoplastic polymer is like a bowl of spaghetti. If you are really careful, then you could separate all the individual strands or chains. This is what happens when a thermoplastic is heated –the chains separate and flow. In the thermoset example, this is impossible.

The crosslinked methacrylate polymers used in impregnation sealants can often withstand temperatures over 392 °F (200 °C).  The sealants can also withstand aggressive fluids such as hot automotive fluids without degradation. As a result, vacuum impregnation is the preferred method to seal casting porosity. It is the simple and permanent solution to porosity.