Electronic connectors can be found everywhere, from automobiles to airplanes. Consequently, the effects of their failure range from the inconvenient to the tragic. The number of such failures can be reduced by better methods of sealing connectors against the conditions that lead to corrosion.

Due to their very nature, connectors are the most vulnerable points in a circuit. Corrosion, from either oxidation or galvanization, reduces current-carrying capacity and results in intermittent, ultimately permanent, failure of the circuit. In harsh environments the major cause of connector failure is galvanic corrosion, a process in which dissimilar metals give up or collect electrons in the presence of an electrolyte, usually water.

Although many connectors are designed for use in harsh environments, too often their service lives are limited by corrosion due to gaps and other leak paths (even microscopic porosity) in the wires, insulation, plastic housing, and pins.

Temperature cycling causes the dissimilar materials in connectors to expand and contract at different rates. Exacerbated by this and other stressful conditions such as vibration or repeated bending, leak paths allow penetration by the main culprit - moisture. In some cases, leak paths even function as wicks drawing in moisture.

Harsh environments where connectors are commonly used include automobile engine compartments; military equipment; outdoor devices; and a wide range of industrial facilities. Lubricants and coolants used to keep automated assembly lines running can attack plastic insulating materials, as can the steam and caustic chemicals regularly used to wash down certain food-processing equipment. And in marine applications such as shipping and offshore oil rigs, corrosion is further accelerated by sea salt.

There are two basic ways to minimize corrosion: plating and vacuum impregnation.

For many years the plating of an electronic connector's contacts with a layer of tin has been a common practice, especially where copper and aluminum are both present. This not only reduces electron transfer, but also lowers resistance and prevents the discoloration of bare copper. Aluminum contacts, if not plated, are often coated with an oxide-inhibiting compound. However, neither practice is effective against harsh environments in the long run.

Vacuum impregnation closes off the leak paths that moisture and oxygen can follow [Figure 1]. Sometimes vacuum impregnation is done in addition to plating. Silicone-based sealants are effective in many applications, as are epoxy-based "potting" compounds. Both types are typically applied by hand to the connectors, but this is a relatively expensive solution to the corrosion problem. In some cases these hand-applied sealants may make final assembly of the end product more difficult and time-consuming, since they are usually not uniformly applied. And, in some automated assembly machines, connectors that don't slide together easily can shut down the whole assembly line. 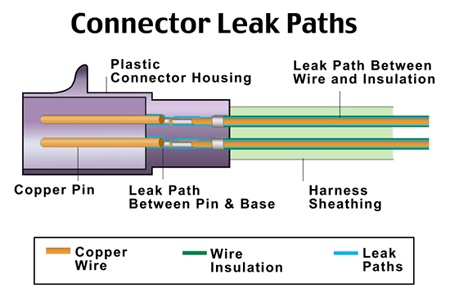 A recent advance in connector sealants, Methacrylate Polymer Resin, provides maximum protection for connectors in harsh environments. Instead of being painted or brushed onto individual connectors one by one, these nonconductive resins can uniformly and economically seal a large batch of connectors, assemblies, and wiring harnesses all at once, in a process called vacuum impregnation.

Vacuum impregnation technology has been employed for decades in the complete sealing of leaks resulting from porosity in metal castings and powdered-metal parts [Figure 2]. The resins, either thermoset or anaerobic, are introduced as a liquid into all voids in a casting, usually via vacuum and pressure. The material is then washed and cured, completely sealing porosity and leaving the part leak-free even under pressure. 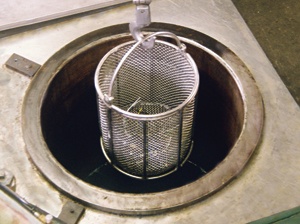 Figure 2: Typical wet vacuum impregnation process line. Vacuum chamber is the first station on the left followed by a basket surger/rotator and finally the cure tank.

There are four common methods of impregnation: Dry Vacuum and Pressure, Internal Pressure, Wet Vacuum and Pressure, and Wet Vacuum Only. The leak paths and porosity in connector components are easily filled with the Wet Vacuum Only approach. Inside a vacuum chamber, connectors, assemblies, or entire wiring harnesses are placed in a bath of low-viscosity impregnating resin and air is entirely evacuated from the chamber. All air in the connectors, wires, etc. rises to the surface of the bath and is removed from the chamber. Once the vacuum is drawn, the return to normal atmospheric pressure is enough to drive the resin into all leak paths.

At this point, the product is water-washed prior to curing, to prevent the sealant from interfering with conductivity. Next, the resin is cured in a hot bath - usually at about 140° F. Though not necessary for the curing process, ions from copper, aluminum, or iron inside connectors can actually function as a catalyst, assisting in the curing process. These metals give up electrons to the resin as if it were a more cathodic metal. Anaerobic resin has proven particularly effective for sealing connectors because it does not require air to cure.

Once cured, the resin is irreversibly cross-linked and will not reliquify. It will withstand temperatures up to 350° F and resist solvents, FreonÂ®, steam, oil, gasoline, glycols, and printing inks.

Yet another benefit of these resins is their potential for flexibility. When necessary for the anticipated application, the resin can be formulated to cure to a flexible state. This is especially helpful under prolonged conditions of thermal cycling, such as environments in close proximity to internal combustion engines.

After the impregnation process, a simple air-pressure test can be performed to prove the connector assembly is thoroughly sealed against ambient moisture and salts that could otherwise cause corrosion and product failure.

In conclusion, vacuum impregnation is the most cost-effective method to completely eliminate corrosion problems in electronic connectors and associated wiring harnesses. In addition to filling visible gaps between the parts of a connector, the process prevents unseen internal galvanic corrosion problems by filling microscopic gaps and porosity throughout the connector and associated wiring - impossible with hand-applied sealants. This added reliability, together with high, repeatable sealing percentages and low-cost benefits due to bulk processing, make the vacuum impregnation process an economical solution for all connectors subjected to mild environments and a must for connectors in harsh environments.